Grants fund UW technology projects on the road to commercialization 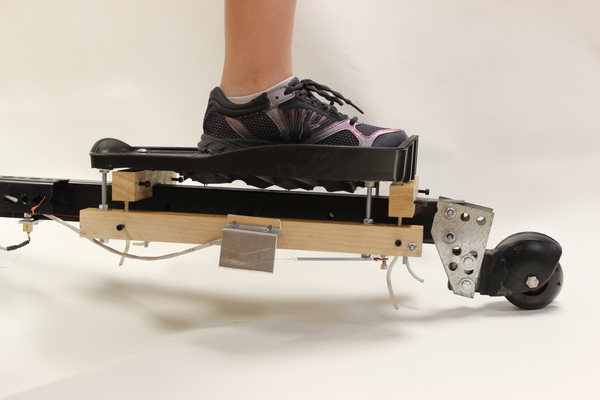 An exercise machine that helps stroke victims walk. An advanced technology for assessing the progress of prostate cancer. A faster process for making neural stem cells to investigate new treatments for injury and disease. A cheaper, more beautiful LED light bulb. A game to teach meditation.

These projects, and a dozen more, are beneficiaries of the first round of awards by the University of Wisconsin-Madison’s Discovery to Product, or D2P, program, which began operating in March. The 17 grants announced this week will support innovations in many fields of research at the university, from food engineering and medicine to stem cell biology and biomedical engineering.

“None have yet reached the company stage. All have proven technology. And all have the potential to advance quickly to the market,” says John Biondi, director of D2P. “Our goal is to achieve commercialization by June 2015, defined as reaching a licensing agreement or creating a startup company that has a high probability of getting funded.”

The Igniter grants are funded by $2.4 million from a State of Wisconsin Economic Development Incentive Grant and payments will be disbursed dependent on progress in each project. The goal, says Biondi, is “market de-risking, rather than technical de-risking. These projects have already shown proof of concept. The technology works.”

The first call for proposals garnered 170 ideas from across campus, says Biondi, a serial entrepreneur who has raised $60 million for his own startup projects. The winners included:

A coordination-retraining device invented by Kreg Gruben in the Department of Kinesiology. Gruben has identified a specific deficit in muscular coordination that can cause balance difficulty after a stroke, and programmed a computer to detect that pattern and attempt to change it on a modified elliptical exercise machine. As the patient learns to correct the stroke-related deficit, the device facilitates practice in the motions of walking.
Su-Chun Zhang, a renowned stem cell biologist at the Waisman Center, was funded to market a new technology to create large quantities of nerve cells and make them available to researchers who are investigating treatments for the nervous system.
Professor of Neuroscience Gail Robertson was funded to commercialize a second-generation test to ensure that candidate drugs do not disrupt heart rhythms.
Saul Laufer, an undergraduate in computer sciences, was funded for an invention that allows a mobile phone to use multiple phone numbers.
UW-Madison’s Dictionary of American Regional English, or DARE, will get assistance from D2P to make itself available to travelers, readers of regional or historical diaries and newspapers, writers of regional fiction and anyone who encounters an unfamiliar word in American English.

All projects will enter an “accelerator” process that will offer guidance and advice toward reaching marketability, Biondi says. “We are holding the hands of these companies in the accelerator program,” says Biondi. “It’s a way of taking the technology, the value proposition, and validating it in the real world.”

Beyond Biondi, D2P’s Adam Sherman, an attorney with a degree in accounting and a new MBA in finance, will offer advice on business strategy and financial modeling. Will Robus, a co-founder of a startup company who also holds an MBA, will perform project management inside D2P and organize the effort to recruit mentors from around the country.

One key to success after a technology has proven itself, Biondi says, is intense interaction with potential customers. “Testing in the market place is essential, and what you find in the market frequently requires you to change the technology; there are cycles of building, measuring and learning that the projects will be going through.”

D2P, a partnership between UW-Madison and the Wisconsin Alumni Research Foundation, or WARF, is one of only a few groups at UW-Madison funding campus projects at the pre-commercial stage, and Biondi thinks it has a competitive advantage in offering so much aid toward commercialization. “We hope the accelerator help will be at least as important as the funding.”

Biondi stresses that even if the projects succeed, the grants will not bring a direct financial return to WARF or the university. “We hope this is going to create products, companies, jobs, and an inordinate number of those will be in the state of Wisconsin. We hope to see Wisconsin technology get commercialized, and we figure that can only bring benefit to Wisconsin.”