WINStep Forward (WSF) is a nonprofit based in Madison, WI with a mission to build a bridge between the United States and India through research, science and technology. 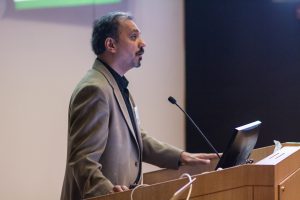 WSF was founded by Dr. Aseem Ansari, Professor of Chemical Genomics and Synthetic Biology at the University of Wisconsin-Madison in 2014. WSF is a nonprofit 501(c)(3) agency organized under the laws of the State of Wisconsin. The inspiration sparked after Dr. Ansari spent some time on his managing the Khorana and SN Bose Scholar Exchange Programs, and saw the potential for reaching greater heights with more people working to help develop the programs. With the support through partnership with the Government of India (Department of Biotechnology -DBT and Science and Engineering Research Board -SERB) and Indo-US Science and Technology Forum (IUSSTF),WSF Forward was born.

Since its inception, WSF has grown from only managing Scholar Exchange Programs to initiating a new training program called “Technology Transfer,” to partnering with Indian Organizations focusing on agricultural sciences in a movement referred to “Rural Development,” and head starting Sci-ROI, a nonprofit that promotes science and technology between India and the USA amongst post PhD graduates and policy makers in India. TheWSF Forward Team is a small, dedicated group of members.

The programs are named in honor of Professor Har Gobind Khorana, a pioneer chemical biologist, who shared the 1968 Nobel Prize in Physiology and Medicine at University of Wisconsin-Madison for helping decipher the genetic code and for developing methods for nucleic acid synthesis and Professor Satyendra Nath Bose, a visionary Indian physicist best known for his work on quantum mechanics and postulation of the Boson in the early 1920s.