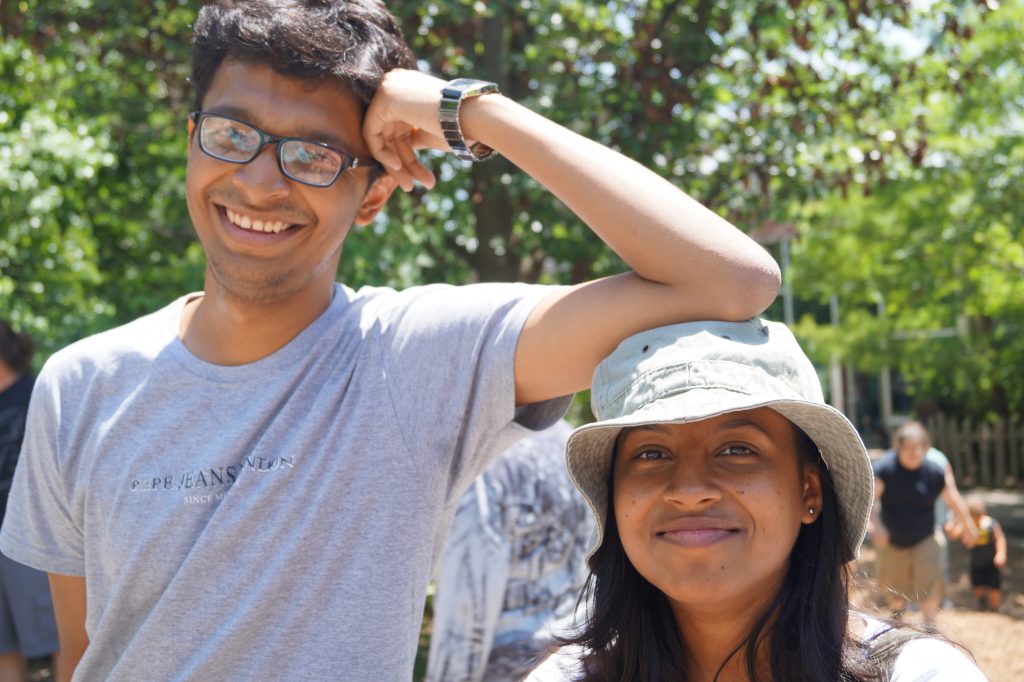 “I am Pallav Goyal, a senior undergraduate student from the Department of Mathematics and Statistics of Indian Institute of Technology Kanpur. I spent my summer 2016 doing a research project under Dr. Steven V. Sam from the University of Wisconsin-Madison as a part of the S.N. Bose Scholars Program.

I arrived at Madison, with a mixture of excitement and nervousness, on the 23rd of May. Having grown up in a small town of India, there was something about Madison which was extremely welcoming to me, homely, one even might say. After months of planning and endless obsession, it was overwhelming to finally be there, just inches from embracing an entirely new culture, making friends from over the world, and, most importantly, changing the course of my life forever.

During the course of my internship I stayed at Adams Residence Hall along with 10 other scholars from India who were there, just like me, as a part of the Bose-Khorana programs. While homesickness lingered for a couple of days, worsened by the jet lag, it didn’t take me too long to establish my comfort zone at Adams. Be it the Den, which became the scene for many a lovely chats, dance nights, games nights, trip planning nights and a lot more, or Adams’ basement, which saw us spending long nights playing Foosball and cards, it really surprises me how easily Adams became our home (not to forget the night with the false fire alarm!)

Undoubtedly, the best part about staying at Adams was its location right next to Lake Mendota. I remember being enthralled witnessing a sunset while being next to Mendota on my first evening in Madison. Sitting at the Terrace and gazing at the horizon was an activity that never lost its charm. Whether I was alone or with company, visits to Picnic Point, jogs by the lake, ice-cream from Memorial Union, kayaking trips, witnessing the most beautiful sunrise I’ve ever seen or nights spent under the stars with my legs dipped in the cool waters, my memories by Lake Mendota will be the most special ones I’ll have from my stay at Madison.

My work during the internship was on ‘Invariant Theory of General Linear Groups over Finite Fields’. I’ll never forget the number of eyes that turned around whenever I used to mention this title! Not that I wasn’t aware about it initially, as I interacted with my friends from India and otherwise, it was interesting to see the reactions of people to the subtle aspects of a mathematician’s life, and I’ll admit, I enjoyed every bit of it. Looking at my stay from an academic point of view, I have to say that this was a very productive undertaking. More than the amount of math I learned, I got to experience the flavour of a career in research, the freedom that it offers to an individual, and how it is up to an individual to use or misuse that freedom. My meetings with my mentor, Dr. Sam, always ended up with me being impressed by his professionalism and his focused approach to solving the problem at hand. I’m glad to say that this experience at Madison has furthered my resolve of pursuing Mathematics research.

Perhaps due to my having grown up as a nerd who always preferred spending time surrounded with books rather than out in the open, I had never been a very physically active person. I say ‘had’ because the beautiful evenings of Madison made it so easy to spend time outside, going on biking trips to the Arboretum and jogging by the lake (motivated by the ever-jogging population of Madison). But the best part was having company for playing badminton for the first time in my life. I had always loved the game, and so, the evening visits to the UW Natatorium were looked forward to very impatiently by ‘the math guy’, pestering others to return from their labs soon!

But I’ll have to say, the highlight of my stay at Madison was the food. The variety of cuisines I got to try – Thai, Italian, Chinese, Japanese, Greek to name some – along with the overall creativity and love I saw in the food in the United States just amazed. Having no fixed working hours, I had the time to explore many more food places than any of my friends at Adams, and I’ll say I made full use of that time. Be it the Scrambler from Mickey’s, pizzas from Giordano’s and Ian’s, ice creams from Babcock Dairy, the Kitchen Sink from Hopcat, Tutto’s Pasta or having Froot Loops for breakfast, my palette got new irresistible treats everyday. And saying all of this would be incomplete without mentioning the love that I developed for cheesecakes! I proudly flaunt having had cheesecakes from Carson Gulley Center, the Hospital Cafeteria, Hopcat, Chicago Airport and, the one and only, The Cheesecake Factory! I guess that, years later, if my fellow Scholars were asked to describe me using 2 words, they’d have to be Mathematics and Cheesecake, that’s how crazy, just the mention of cheesecakes made me (‘crazy’ being a gross understatement).

And I would have failed in giving a complete description of my internship experience without mentioning the bunch of monkeys that I met at Madison. Oh wait, I meant the bunch of friends that I met, but I guess the sentiment is clear! Jokes apart, it’s crazy how a self-proclaimed-introvert felt so in-place with people he’d never known in his life. It amazed me how all of us hit it off together so well, helping each other in times of need, making fun of each other and laughing with and (more often) at each other. Time passed so quickly during those evenings in the Gatehouse with people cooking, fumbling, making jokes, committing cooking blunders, fighting over the last bite of food, bonding! The peculiar tastes of no person remained hidden for very long, and with time, the time spent together kept on becoming more exciting, more entertaining, more fun. Years later, I hope that we all meet somewhere, reminisce about our stay at Madison and, to sound a bit cheesy, recreate some more timeless memories!

Having a fun and enthusiastic gang with you makes exploring a new country much easier, I can vouch for that. Starting out with the weekend at Chicago, followed by trips to the Capitol Square, the Henry Vilas Zoo, fireworks at Monona Terrace, the visit to the Gurudwara in Middleton, the overnight bus journeys and the day at Minneapolis, Professor Ansari’s lunch at Adams and our lunch at his place, Skydiving at Beloit, it seems as if I can just go on and on about it all. And the best part about Madison is that you don’t need to visit all these places to make it worthwhile, a stroll through State Street is enough to make you appreciate the zest for life, getting drenched in the rain when you’re all dressed up pointlessly is enough to make you feel mad, and yet, satisfied, a sunset at the Terrace is enough to make you want to sit down and brood about The Answer to Life, The Universe and Everything.
There’s so much more I can write about – all the eleven campus libraries that I visited, the movie at Camp Randall, the never ending Biologists v/s The Rest of the World arguments, people gossipping about their respective labs (everyone except me, of course) – but I know that there’s no point to that. I had always believed that words are very crude approximations to reality that were created by us out of necessity, and so, it’s impossible to put a life-altering experience on paper without diminishing it to much less than what it actually is. And this internship at Madison has reaffirmed this belief of mine, because although words like “Ada Paavi”, “Watcha doin’ bro”, “Chagdi”, “Kool”, “Haule Haule”, “Chumma”, “Dowry points”, “Feminist”, “Axiomatic”, “Lakhan” will always fill me with nostalgia, any length of paper will be too little to contain all of what I went through over the two months I spent in Madison…”