I don’t know for others, but for me 25th January will always be an important day for me. I still remember how many times I checked the mail from IUSSTF so that it doesn’t turn out to be a spam mail and still today, even after completing my internship, I still can’t believe that I actually got this prestigious scholarship. Anyways, everything was a first time for me, not only this was my first international trip but my first solo trip ever. Therefore, my excitement and nervousness was on another level altogether. Moving forward to the Chicago Orientation, although it was a short one but it was the best way to start my 11 weeks of journey in US. It was an amazing experience that I had with the fellow scholars, starting with the lectures by eminent personalities in University of Chicago, then a little tour of the university and then the bus tour through the downtown of Chicago. Then getting lost in the city with some of the scholars is something that I will never forget. With no idea where we were going, and just walking through the streets with the chilly winds giving us shivers, was a whole new experience for me and I surely enjoyed that night. It was a little bumpy and tiring ride to Madison but then, after finally reaching, I was mesmerized by the beauty of the place and the excitement engulfed all my tiredness. Everything was arranged before by Winstep and it felt like we were some special guests in the place. 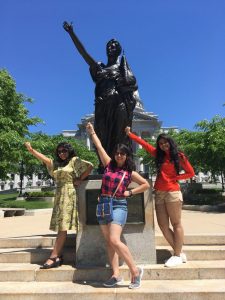 Let’s talk about Adams Hall, which was my home for the summer that I spent in Madison. It was the most sophisticated hall in the entire neighbourhood, located just behind the beautiful Lake Mendota and although all the Wisconsin scholars were given beautiful rooms but I was a little lucky to get a lake view room and that was enough to make my fellow scholars and my friends a little jealous. All the important places were quite close to my dorm, starting from the city Capitol, the beautiful, and not so much of a lake, Lake Mendota, the important departments including my Biochemistry department. Due to the close proximity of several bus stops and a good frequency of the buses, it was very easy to reach the required destinations. But I mostly preferred walking because to enjoy a beautiful place like Madison, with the enticing greenery, walking was the best option. Madison, being the capital city of Wisconsin, was far away from the hustle and bustle of the city life and that’s what attracted me more. Although a city with a very little population, the friendliness and caring nature of the people was something that left me dumbstruck because I had a different view about Americans. 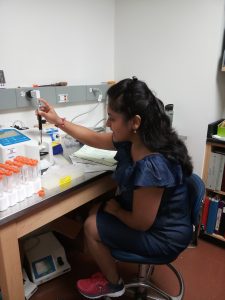 Now focusing on the main purpose of going to US, my research focus was on the atomic- level interactions of formamide, 1, 1-diethylurea and 1, 3-diethylurea with protein groups and ions, providing insight into protein amide and hydrocarbon interactions and comparing the quantitative data with the standard data of Urea. I was given my own space where I had to work on calculations to get the quantitative data that I got from the readings but mostly I spent my time in the instrument room, like spending 6-7 hours at a stretch but it was never tiring because I was accompanied by other graduates who were involved in the same project as me. The project had many other aspects and it is still going on. Dr. Thomas Record was an awesome mentor to me and he gave me the privilege to work in his ongoing project and help Dr Xian Cheng, who patiently explained the details and the outline of the project and helped me to understand the nitty gritties of the topic. The field was totally new to me since it involved some biological aspects but I was keen on working and getting an experience in this field as I am planning to work in a similar field in future, and under the able guidance of my mentor, I just loved and enjoyed the work that I did in their lab.

There was no single weekend that I was in my room. I actually waited for Saturday since the starting of the week. The best part of doing the internship in UW Madison is that since there were so many scholars, so we had the most fun in the weekends. Starting the day by going to the Farmers Market and then followed by local sightseeing. Dane Country’s Farmers Market, as it is called, is a gathering of the local vendors from Wisconsin, which includes farmers, food trucks, artists and sell fruits, vegetables, flowers and other special delicacies of the place like cheese curds and other bakery products like brownies, scones and donuts and we used to spend some time in exploring the entire market and tasting the amazing cheese curds which were my favourite. There are a lot of attractions in Madison which I covered in the subsequent weekends.  Since Chicago was quite close to Madison, thereforem I took the opportunity and went back to the place with one of my fellow scholar and explored the amazing attractions, which I could not do during the orientation. It was a sudden trip and as it is rightly said, Sudden and unplanned trips are the best and we had a blast, with amazing experience in the Skydeck and Chicago 360, fun interactions with the dolphins and sting rays of the Shredd Aquarium and how can I forget about the amazing taste of the famous Chicago’s deep dish pizza. The experience was beyond my expectations and made me so much confident in many other aspects. 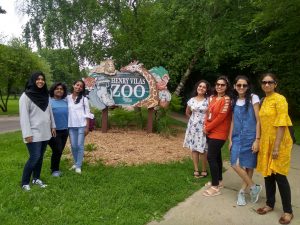 Since it was a rainy Independence Day in Madison, not much of the celebrations could happen but I was able to witness their celebrations, like they kind of start  celebrating the Independence Day before the actual day, during “Shake the Lake Festival” where they put up an amazing show with the fireworks by the beautiful Lake Monona accompanied by musical concerts and street food. On 4th of July, I had an amazing time with Prof Ansari and Naveeda, who gave a wonderful lunch treat at a famous Indian restaurant in Madison, to all the former and previous scholars and the day ended with shopping with my fellow scholars. That very weekend, was the best weekend for me because we went to hiking and swimming in the beautiful Pewit’s Nest and Devil’s Lake. Devil’s Lake, as the name totally contradicts the beauty of the place, was an hour drive from the main university campus. The greenery of the place totally amazed me and hiking within the trails of the deep forest was a whole new experience for me. Not forgetting to mention about how much I enjoyed in the beautiful waters of the lake by playing beach ball with the scholars. All this was possible because of the initiative taken by Winstep, to gather all the scholars and make the day most memorable. So apart from the long sightseeing in the weekends, I had fun in weekdays too. 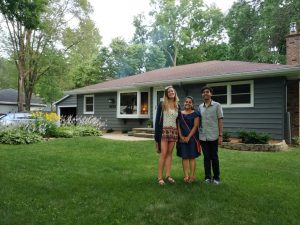 I would like to thank Lexi Frerks first of all because it was due to her, that even after coming back from lab, I was always excited to go out with her and meet some amazing people who later have become such good friends of mine. I attended the Bible study and seeing such dedication and love for God within the college going students was literally a rare sight. After this, I was always invited to the gatherings that these people had and I used to have so much fun with them, playing mafia and other outdoor games, singing songs, cooking together, like the experience was out of the world. Oh, how can I forget about the bonfire expe

rience in the Picnic Point in Madison, like it was awesome, relishing the taste of S’mores, I still cannot forget it’s amazing taste. The most valuable experience I had and which I enjoyed a lot was cooking in the amazing kitchen of Adams Hall. After coming back from lab, and deciding what I should have for dinner, it was actually a brain teaser. Then gathering all the ingredients and cooking together with the other scholars while listening to Bollywood songs followed by late night gossips, it was so much fun. On the last day, the 10th Anniversary of the Khorana Program was celebrated and I am extremely thankful to Winstep and Prof Ansari to give me the opportunity to present my summer project in front of some great personalities of the un iversity.

So as my stay in the beautiful place was coming to an end, on one hand I was excited to meet my parents but on the other hand my desire to stay there somewhat overpowered the first and I actually was praying if somehow my stay got extended. The bonding that I developed with Lexi and her friends amazed me very much, they were so sad when I met them for the last time and their sweet, friendly nature still makes me miss them so much. The weekends in Madison, having fun time with Lexi and her friends during the weekdays and late evening strolls by the beautiful Lake Mendota are some of the many things that I really miss now. Not forgetting to mention about the amazing time that I spent with the fellow UW scholars, my overall stay in Madison during the summer was amazing and way beyond my expectations. I fell in love with the simple and quiet life of Madison, the greenery and the serenity of the place and I really hope of going back in future.