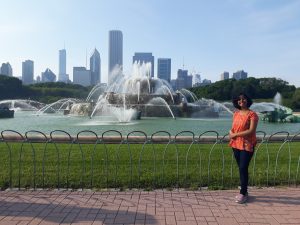 Two months has passed since I returned from US after completing summer internship and I still remember how happy I was when I learned acceptance to this program. It was around 2:00 am I got the mail notifying my selection. I was euphoric and had to hold back until morning to share the word with my family. I was introduced to Khorana program by a friend and on search found that it will be a great exposure to strengthen one’s research capacities. I have intention to pursue PhD in reputed US universities, this program function as a gateway to aspiring scientist. The program was the culmination of all my favourite fields which made it highly endearing to me. I was encapsulated by the rapturous feeling of been selected for one of the most prestigious and highly competitive program and hand-picked as the WINStep scholar to one of the elite and reputed university…The University of Chicago!

The entire visa process was a roller coaster ride .My visa took more than a month to clear administrative processing. Immediately my travel was scheduled and there begins securing affordable place to stay close to my lab. Just before taking the flight from Delhi I was assured on the place to stay. I was ambivalent while travelling at the same time excited. The first day in the windy city, Chicago is unforgettable! It took more than two days to subdue the jet lag. 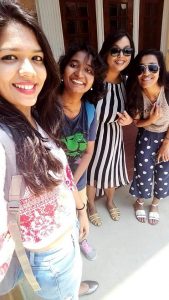 My first day in university is perspicuous to recollect. Professor Yamuna Krishnan was my first interlocuter. A briefing was arranged before I start with my lab work. She was very excited and quoted that I am in the good hands! I was greeted by my host, Professor Joseph Piccrilli, one of the highly acclaimed and unassumingly humble people I met in US. He took time from his busy schedule and ushered me around GCIS where my lab is located and introduced to each and every facilities available. He made me comfortable to the new environment so I could blend pretty well with my lab culture. The Piccrilli lab is broadly interested in the chemistry and biochemistry of nucleic acids with particular emphasis on RNA and RNA catalysis. I was assigned to study the effect on expanding substrate loop of the largest nucleolytic ribozyme that is Varkud Satellite ribozyme. The lab environment was stress free and encouraging for the young minds like me to ask questions and find answers on our own way. I was enchanted by Gothic architecture of the university. I came across international students and it was a great platform for the exchange of ideas. 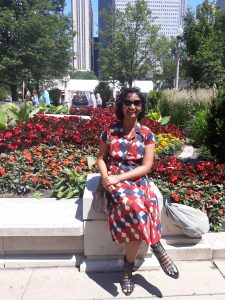 Now talking about living in Chicago, It has great public transport system and there is art on every corner. For this reason it is called the architectural capital of United States which gives unrealistic standards of beauty for all other cities. There is Lake Michigan blue all around the city. There is not even a single week without the famous fireworks! And the streets are kept clean when compared to other cities I have been. In a span of three weeks I had visited along with fellow scholars to the famous tourist attractions in Chicago the millennium park as it is said, it is actually work of art and in summer it is nothing short of paradise, Navy Pier Ferris wheel is epic, the adventurous sky deck at the 2 nd tallest tower in the world, the Willis tower where I felt Chicago at my feet! And the finger licking Chicago special deep- dish pizza, Chicago style hotdogs were prodigious. I had the best beef burgers and sandwiches.

As we were five scholars together we had few swashbuckling actuate outside Chicago. Our first such destination was Madison which is three hours away from Chicago. Doesn’t matter which all places I visited, it has its own serenity. Unlike Chicago it has magnificent township. The most venturous trip we had was to NYC and Niagara falls. I can’t ignore how unflagging and happening Time’s square was. The statue of liberty was breathtaking. Nothing can explain the splendid Niagara Falls. I could not believe that places I have only seen in photographs are right there. All my dreams were coming true then.

Did not realise I am approaching to the end of my internship. I could crystallise RNA during this time however I wish I had more time so that I can optimise few more conditions and carry out kinetic studies of VS ribozyme. It was on the fourth week of July I wrapped up my project. I was overwhelmed by the farewell given by Piccirilli’s lab! Throughout my journey each and everyone contributed immensely and extended their affirmation to all my endeavours. Professor Yamuna Krishnan’s words are still resonating in my ear “You are in good hands”! And time proved it to be unequivocal.

The whole experience was intellectually enriching and has a great impact on my holistic growth. My first international trip made me outgoing, surefooted moreover independent (I learnt some easy dishes to cook).Oh yes when I flew from O’Hare International airport I got farewell light show! I extend my gratitude to WINStep for giving aureate opportunity which is bliss for students like me to have a career in science.