It was the evening of my 21st birthday on 20th February, 2018. I was regretting having to spend it going to an evening class at 5pm. Around half the lecture had passed and my attention was waning and I quickly heard my phone buzz under my desk. I normally don’t check my phone in class but when I glanced, it read “Congratulations Scholar! You have been provisionally selected for the Khorana program…..”. In excitement and disbelief, I shut my phone and tried to concentrate on the lecture. This was the best birthday gift that I could ever imagine! A week later, Dr. Julia Salzman from Stanford University wrote to me saying she’d love to have me over as her summer intern in her lab. After a couple of Skype meetings with the assigned guide and a PhD student at Dr. Salzman’s lab; Robert Bierman, I decided that Stanford University was where I was going to spend my summer. I had visited the university earlier but I was looking forward to spending my time there as a student now. 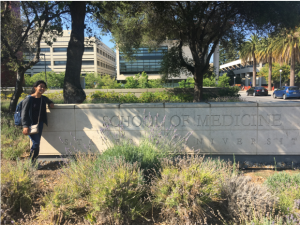 A few months later after weeks of struggling with forms for the Visa process and other necessary formalities, I arrived in Chicago first for the Winstep Khorana-Bose scholars orientation. I had a great time learning about everyone’s ambitions in their respective fields and their areas of research. In a span of less than 1 day, I had interacted with over 10 people enough to keep in touch for the rest of the summer regularly! Right after the orientation, I boarded my next flight to San Francisco. It had been 2 years since I visited the beautiful city and Bay Area. I was going to be living with my relatives for a few weeks and my sister for most of the time. After getting the hang of the commute options, I learnt how to use the Caltrain and BART (Bay Area Rapid Transit) services. Although the entire journey commuting from San Francisco to Palo Alto station was over 45 mins, I would look forward to each day walking uphill and downhill through the streets looking all around me at the mist covered city. It did not feel like any summer I have ever experienced with the weather being a constant of 12 degrees celsius at all times. 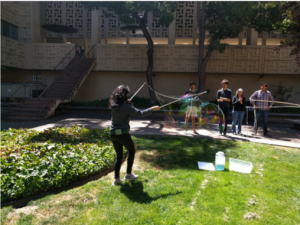 The hot summer weather only hit me when I would reach Palo Alto to go to the university. The university shuttle would then pick me and drop me to the medical school entrance where I would get off to go to the 4th floor of Beckman Center at the department of Biochemistry. Stanford University has a 200 year old legacy which is evident in the beautiful architecture. It was a delight to walk through the streets of the campus every day and sometimes, during lunch time. I was assigned a big desk in the lab and access to the powerful Sherlock 2.0 cluster that I had only heard about through a television series called “Silicon Valley”. Having heard enough about the power of this multi node cluster, I was extremely impressed with the power of the cluster. As my project primarily involved parsing huge genomic files and running bioinformatic algorithms, it was required. The work culture of the lab was very different from that of labs that I had experienced in India. The environment was very informal and sometimes, we would just go off to the Stanford Hospital to blow bubbles for recreation on a clear afternoon. A few weeks passed and I was happy to find results that were part of the goal. I felt extremely honored as they tweeted about me and wrote on their lab page! 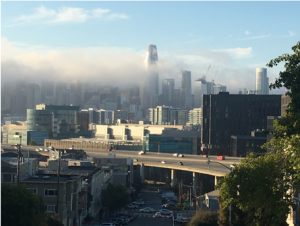 Throughout my internship, I got to learn a lot about ‘pandas’ and ‘seaborn’ libraries in python that are used for Big Data Analysis. I was also introduced to the ‘tidyverse’ and ‘glmnet’ packages of R programming language. What was even more exciting for me was that a week after learning about glmnet (a package used for generalized linear modeling of data) and tidyverse (a package that is used for Data Science), I got to meet Rob Tibshirani and Hadley Wickham who were the founders and writers for the two packages! They are also professors at Stanford so it was very interesting for me to learn about their research. My weekly lab meetings with my mentor and daily review sessions with my advisor Robert were extremely helpful for achieving the goal of the project. 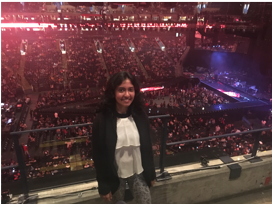 Although my work hours were pretty hectic, it did not hinder any of my plans of roaming around as a tourist. I got to visit Clear Lake in California and a Maroon 5 concert at Oakland Arena which was amazing. I also got to visit Portland, Oregon which was up north of California for a weekend’s trip with my sister. The whole scenery on the west coast was beautiful with tall redwood and pine trees and perennially blue skies. Food in San Francisco spans over 20 different cuisines if one is interested in trying new cuisines. Being a vegetarian, it was not a problem at all to find interesting cuisines to try. I could taste Ethiopian, Japanese at Cha-Ya, Burmese, Chinese and east-asian, Mediterranean and Mexican food throughout my stay.

I am thankful to Winstep and the Government of India’s Khorana Program to sponsor my trip and my internship. This whole experience has motivated me to pursue a career in research in the future.