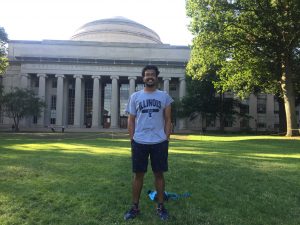 Visiting a western country while being an Indian citizen gives you a plethora of experiences that helps in building a lot of your future. USA is the only superpower in the world and is still the frontrunner when it comes to science, technology and R&amp;D. I have a chemistry major and hence applied to one of the best chemistry schools in the USA (which makes it one of the best in the world); the School of Chemical Sciences of the University of Illinois at Urbana-Champaign, Illinois, USA. My project was in solid-state Nuclear Magnetic Resonance (NMR) spectroscopy and I conducted a meaningful research project in my tenure of 2.5 months. It’s a great feeling when you get to work in the same building where Paul Lauturber discovered the technique of Magnetic Resonance Imaging (MRI) and received the Nobel Prize in Medicine for it. In the following few paragraphs, I’ll walk you through my vivid memory lane in the US and share my experiences that may benefit you in some way. 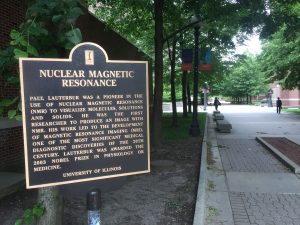 The best part of life that you can possibly learn from the US (and other first world countries) is being disciplined in whatever work you might undertake. This particular trait immensely lack in the Indian way of life and in my opinion, is the most important reason for us still having the “developing nation” status. Our country has universities and so does the US, but if you are in a US university then you will literally understand the meaning of the term “university”. In my short period of stay, I made “friends” with American, Chinese, Japanese, Korean, Mexican, Brazilian, Argentinian, Danish, Indian (of course), Polish and Nigerian students. I’ve had a junior undergrad in our lab who is an American citizen but by ancestral lineage is 60% Polish, 20% Mexican and 20% American! You can experience authentic culture of so many countries by just visiting this one country. I signed up in a community called the Asian American Cultural Center (‘Asian’ means the Asian continent and ‘American’ means both North and South American continents) and used to go every Monday and Friday after work to learn and eat new food recipes that are prominent in different cultures. They also have painting and apparel sessions which happen primarily during the semesters. Urbana and Champaign are two pretty low-key cities (counties) in central Illinois and is heavily populated with restaurants and food-outlets. Outside the university premises, its miles and miles of prairies and one can spot factories, ranches and windmills at times. 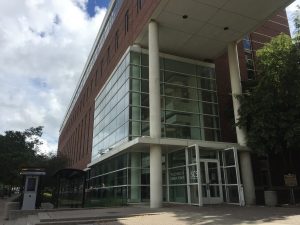 During my stay in the US, I toured Chicago (Illinois), New York City (New York) and Boston (Massachusetts). New York, the city that you see in almost every popular American movie (I could particularly relate with the Spiderman movies with Tobey Maguire as Spidey). It’s the city where all sorts of people from the country and around the world come to find work. It’s the city that made world-class Indian-American comedians like Hasan Minhaj and Aziz Ansari. The city with unending high-rises (highest in the world!!!) and holy smokes if you’d see that crazy high World Trade Center! My best time at NYC was the night at Lincoln Center at a Christian McBride concert. For those of you who don’t know, Lincoln Center is  arguably the stage of highest honor for Jazz music. Two hours of classic music with a chilled glass of Jack Daniels made my memory of a lifetime! Boston is also a city with great historical significance (ever since the Brits and the French had colonies, Boston witnessed everything from the Seven Years war, the American War of Independence with the remarkable Boston Tea Party and continues to be one of the most important ports in the US). But for us science geeks, Boston sits in the middle of Harvard University, Massachusetts Institute of Technology (MIT), New York University, and Boston University and hence Massachusetts is also nicknamed as the University State. Hopping through some of the historical spots and spending most of my allotted weekend in Harvard and MIT was simply mesmerizing and appalling. “Going to Chicago… sorry but I can’t take you…” – When the Levee Breaks (Led Zeppelin). Chicago appealed to me in the highest possible way! Also called the Windy City (because the city is really windy and also some other unpopular reasons), Chicago is home to classic western Rock and Jazz. The beautiful city landscape is not too overwhelming like New York, and the Michigan Lake makes it all too beautiful. I experienced my first ever Live Rock music here and also relished the famous deep-dish pizza! 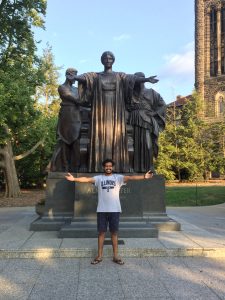 I could go on and write so much more about some of the very educative interactions that I had with people during my stay, but I need to stop haha! The above story might give you an impression of an all-fun country with so much to offer, but is not always so. This country, although setting the best standards in science and solving the most challenging of problems, is neck-deep in a convenient way of life. As Indians, we have learnt how to make do with limited resources but are still much better off when it comes to fighting climate change and not harming the environment as much. The garbage generation by an average American family is far higher than any other country in the world and is still the largest oil producer/consumer in the planet in a time of climate emergency and imminent apocalypse. Hence, I want to end with this: Be proud that you have grown up with certain good values as an Indian; just learn to be polite to everyone and be disciplined towards all forms of work from the USA. Be a responsible scientist/engineer. If you want a job in the oil company, then don’t just contribute to the emissions by being an employee; rather get into that company and transform the way they produce energy or figure out a way to use oil in an eco-friendly way. After all, you are an S. N. Bose/Khorana fellow!