It was the second week of January and my 6th semester had just begun. My mum had come to visit me in Mohali, and I took her shopping to a mall nearby. I still remember she was in the trial room and I was waiting for her outside when my phone buzzed. I checked the email, read its first line which said

“Dear Cheshta Bhatia, I am pleased to inform you that you have been provisionally shortlisted for Khorana program for scholars, 2019”

And I jumped with happiness. I screamed with joy and banged the door to hug my mom tightly at that moment. When I look back, I think this was the happiest moment of my life so far.

As next steps, we had to suggest the professor we would like to work with, and he should agree to support you through Khorana fellowship. I got selected to work in the neuroscience department of MIT as well as the Center for Brain Science, Harvard University. I chose Harvard because the work in Harvard seemed more interesting to me. There are some things you know exist, but you don’t expect they would happen with you because you consider yourself to be too naïve for it. Harvard was this for me. Since I was a kid, I knew it is the best place to be at, but I had never, not even for a split-second thought that I would get the opportunity of working there. Honestly, I did not get the realization that all this was actually happening till the departure date arrived. 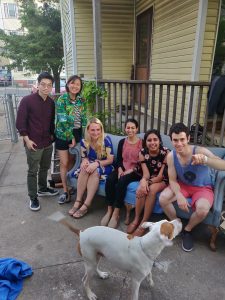 16th May 2019, the date I was finally leaving for the States. I am originally from Delhi and was in my home when at around 6:30 pm, my parents got a nice cake for me to celebrate my birthday in advance, which was a week later. That is when I started becoming cognizant of the fact that I will be in a different country for two and a half months. It was a very mixed feeling, from being excited and nervous and emotional and everything at the same time. I reached the airport and met 5 other people who were traveling in the same flight. Being a very social person, meeting new people makes me happy.

We all were traveling till Chicago where there was the Khorana program orientation at the University of Chicago. We all took seats together and the journey was a lot of fun together. Due to the delay in our first flight, we missed out second flight from Frankfurt to Chicago! It was very stressful to run and try to catch our second flight (on an airport as huge as Frankfurt!) and watching them close the gate in front of us. But to be honest, when I look back now, all of us had so much fun on the Frankfurt airport. Those 6 hours did not feel like 6 at all! We were just living that adventure, without realizing that we made the best memories.

After reaching Chicago, we went to the hostel Khorana people had arranged for us. Shortly after having dinner, we went for a midnight walk in Chicago and “OHMYGOD, CHICAGO IS SO BEAUTIFUL AT NIGHT” were the only words we said. We attended the orientation program, got a nice tour of the gorgeous University of Chicago (which has HOGWARTS FEELS!) followed by a Chicago city tour. It was our last night in Chicago and all of us went to the Willis tower to get a fabulous Chicago night view from 1450 foot above the ground! We then had the delicious deep-dish pizza for dinner and there could not be any better way to end the day. 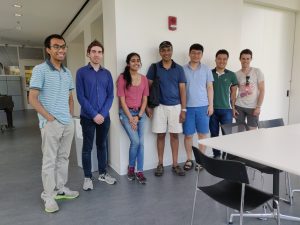 The next day, all of us headed to different places for our respective internships. I lived in Cambridge in an apartment very near to my lab. Harvard University is a beautiful place to be at. It has lots of open green spaces, big old architectural buildings and some or the other fun event happening every week. Cambridge was the city of dreams for me, not too big to be overly populated, has that classic old feel to it and situated just 15 minutes away from Long Wharf (in Downtown Boston), where I spent many weekends just peacefully observing the Charles river. I describe Cambridge as the “Small Science Village” where every thought begins with Science and every conversation makes you think about something so deep. In Cambridge, whether a person is 5 or 65, everyone has their curiosity alive and this is what makes me fall in love with this city.

During my stay, there were at least 2 seminars every week in the Center for Brain Science with each talk suggesting something that made me fall in love with my decision of keeping my curiosity alive and pursuing research all over again! I interacted with a lot of scientists while my stay in Harvard, and science was not just their job, it was their passion. When they described their work during our interaction, they had a different level of contentment which I can never stop admiring.

There were days I worked 10-12 hours at a stretch in my lab and didn’t feel tired at all. As Mark Twain correctly says, “Find a job you enjoy doing, and you will never have to work a day in your life.” It was an experience of a lifetime to work in such a well-equipped lab, carrying out experiments and having thorough discussions with professors talking about ideas that made me brainstorm every single day.

Everyone in my lab came from a very different place. Being very extroverted, I never have the problem of developing new friendships. In fact, I love meeting people and discovering diverse cultures. I developed close friendships with people from China, Germany, Japan, Korea, Russia and obviously States! And trust me, it is so much fun to have lunch with people from different places and listening to how they grew up in a completely different culture yet following the same school of values as any of us.

I also had the opportunity of calling my mom for 3 weeks in the middle of my internship. Along with other fellows, I planned a trip to the VERY GORGEOUS NIAGARA FALLS! We did a lot of touristy stuff in and around Boston also. My dad couldn’t visit due to his official commitments but if you get the chance of calling your parents while you are abroad and making them visit a new place, never miss it. The contentment of seeing your parents happy because of you is incomparable. It is the best feeling ever!

My journey is full of lots of ups and downs like any body else. I remember myself being an underconfident MBBS aspirant who, like most other high school students in India, is expected to pursue MBBS if he/she has interest in biology. I had biology with mathematics in high school and worked extremely hard with an aim to get into the best medical school, but I never enjoyed the process. Things kind of happened together for me, randomly waking up one day and giving KVPY, getting selected in it, getting admission in IISER, Mohali and realizing that deep down, MBBS was never for me. It was something I wanted to do because of the lack of my awareness about research and because that was what I was expected to be by the society. Till date, when I meet people and tell them I am doing research, they don’t understand it. But in the end, this is what makes me the happiest and as they say, it’s all worth it if you are happy in the end. The only message I would like to give to all high school children is that never get influenced by what others tell you to be in life, find what makes you content and work hard to achieve it. There is no replacement for hard work and unless you love what you do, you can never give it your hundred percent. Things like nepotism, bias and partiality will feel unfair, but they will just be a part of the journey and won’t last for long. What lasts is your constant dedication and sooner or later, it WILL show. Also, surround yourself with people who constantly motivate and appreciate you. You should have no room for any negative people in your life. I have a very small group of close friends and trust me, they were happier than me when I got into Harvard!

In the end I would like to end by saying, Dreams do come true, we just need to chase the right things. Cambridge is a place which has made me more mature, taught me how to be independent, cook my own food, do some amazing science experiments and of course interact with some scientists whom I will admire for the rest of my life. The city of Cambridge has my heart and I will surely be back here!