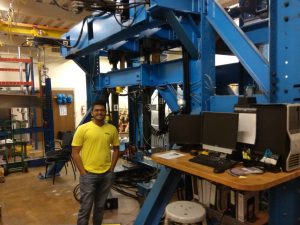 This was exactly what happened with me. I applied for the SN Bose Scholars program in October 2018. I never imagined that I would get selected. It was the second Tuesday of January 2019, an ordinary day when my phone buzzed with an email from bose@iusstf.org stating that I was provisionally selected for the SN Bose Scholars Program. I started surfing the meaning of word ‘provisional,’ read every possible meaning, and ended up realizing that my selection for the prestigious program was confirmed. I was over the moon.

The next arduous task was to convince a professor to accept me as a research intern. I started emailing professors, right from east coast to west coast. It was the real test of my patience. After sending several emails and getting multiple rejections, I received a positive reply from Professor Benjamin W. Schafer, a faculty in the Department of Civil Engineering at the Johns Hopkins University (JHU). Not only did he accept me an intern, but also provided me with a munificent stipend. He is the leader in the field of ‘Thin Walled Structures,’ and I had always dreamt of working under his supervision. With a great excitement, I started the paperwork required to obtain the J1 visa. Completing the exacting legwork in a month, I was set to fly. 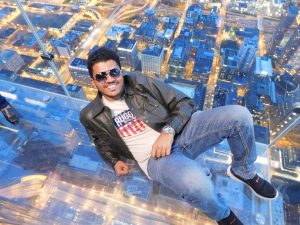 It was a hectic two-day journey involving travel through airplane, train, bus, and taxi. After arriving in Baltimore, I completed all the formalities in a day and started working the very next day. In the first two weeks, I finished the literature review to get the basic knowledge required to start working on the actual projects. I was given the freedom to choose the projects to work on, so I chose to work under the guidance of Dr. Shahab Torabian, Adjunct Associate Research Scientist. My fellow lab-mates (MS and PhD students) were conducive and occasionally helped me with my research work. My first project was to examine the behavior of Cold-Formed Steel (CFS) stub columns under the axial compression, where we investigated the effect of distortional buckling on the local buckling capacity of the columns. In the initial stages of the project, I ran computer simulations in order to come up with the suitable specimens to be tested. Then, I fabricated the specimen with the help of lab manager. The testing was conducted in the Thin Walled Structures Laboratory at JHU. The second project was to understand the load carrying capacity of CFS-Concrete Filled Tubular (CFT) Columns under static axial compression. Here, again I prepared specimen and tested them in the same lab. This study helped us to evaluate the feasibility of CFS-CFT columns for actual construction practices.

In the third week of May, I attended the orientation organized for KhoranaBose scholars at the University of Chicago. It was more of a thought-provoking session than a formal orientation. It was nice meeting other scholars interning in different parts of the US. It helped me to grow my connections. I roamed around in the windy city, experienced the famous deep-dish pizza at Lou Malnati’s, visited Willis Skydeck and the Cloud Gate. After two exhilarating days, all the scholars headed back to our host university. Besides Chicago, I explored New York City, Washington DC, and Downtown Baltimore. The places like Statue of Liberty, Times Square, Madame Tussauds Museum, Wall Street and Lincoln Memorial were unforgettable. Needless to say, this was all possible because of the generous stipend provided by IUSSTF and my host professor.

As a Bose scholar, I had an unprecedented experience in the States. I got acquainted with the western culture, interacted with some of the best minds in the country, and enjoyed my stay thoroughly. I would like to thank my family, friends, IUSSTF and WINStep Forward for supporting me throughout the internship.