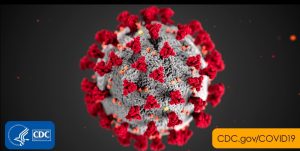 Coronavirus pandemic has shuttered shops, schools, colleges, transportation and even countries. United Nations has declared that all of humanity is at risk and requested global action [1]. This outbreak has affected billions of people worldwide and is predicted to cause significant disruptions in the global economy. People are forced to stay at home and all non-essential events have been suspended indefinitely. Whole of the human race is fighting a war against the invisible enemy. Humans should never forget that the countries with nuclear weapons which could finish the entire species thrice were short on doctors, medicines and hospitals. Countries have trained hundreds of thousands of soldiers with numerous techniques to kill one another. Those soldiers are now making masks, ventilators, cleaning streets and distributing food. While everyone was preparing to fight one another, an nanoscopic virus, invisible to human eyes has crippled the world order. 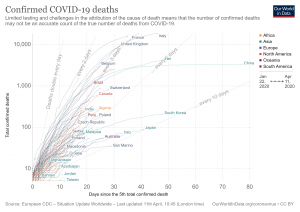 The biggest threat to world order is the failure of capitalist system. Most countries have huge debt and fiscal deficit. This outbreak has affected billions of people worldwide and is predicted to cause significant disruptions in the world economy. Experts claim that the global recession has started but the effects will be visible only after the countries remove the lock down. In this article, we will discuss how one of the largest pandemic in modern human history started and spread.

When I started writing this article on 26th March, 2020 the number of infected had increased to 416,686 confirmed cases and 185,89 people have died in 196 countries all across the world. WHO (World Health Organisation) has named this new disease as COVID-19, as the first patient was identified on December 2019. Surprisingly, rather than naming the virus SARS-CoV-19 it was named SARS-CoV-2. The name was chosen because the virus is genetically similar to the virus outbreak of 2002-2003.

Between November 2002 and July 2003, the outbreak of SARS-CoV in Southern China led to 8,273 cases and 775 deaths in 37 countries. Majority of deaths were reported from Hong Kong. Phylogenetic analysis suggested that the virus spread from bats and animals kept in Chinese markets. China and WHO claimed that by January 2004 the virus was eradicated [4].

Does it sound familiar? Of course it does. In December 2019 exactly the same thing happened but this time many more people are infected and dying. Every year World Health Organisation (WHO) reports many disease outbreaks but most of the diseases are contained with immediate response of the local governments. The most essential steps to prevent a massive epidemic is to identify the infected people, trace the contacts of the patients and quarantine them. Some viruses like Nipah and Ebola have higher mortality rates. The infected people become pretty ill and are unable to spread the infections. However, in COVID-19 many infected people do not even show symptoms. Hence, they continue to spread the infections among more and more people. Thus, it is essential for the local government to take immediate actions to contain the spread of the virus before it becomes widespread. World Health Organisation (WHO) is a regulatory body which keeps a track of different outbreaks. Additionally, it makes the government accountable to tackle these diseases and issues restrictions for travel.

On January 12, 2020 WHO released a statement advising against any travel restrictions against China. Till April 11, 2020 there have not been any other updates by WHO on the COVID-19 situation in China [5]. In the next few weeks after the WHO statement the number of corona virus cases in China skyrocketed reaching as high as 65,000 by mid-February. China took drastic measures including the lockdown of at least 50 million people of Wuhan and nearby cities. In the first week of March the number of new cases in China were reduced. Countries across the world took numerous measures to curtail the spread of virus. Some, of the countries which reacted casually in the first few weeks of March have observed exponential rise in new patients and deaths. In rich developed countries, economy can be sustained by the government for few months. However, they reacted slowly to the pandemic. On March 13, 2020 WHO declared Europe as the new epicentre of the pandemic. Italy, Germany and France, all hailed for superior medical infrastructure, crumbled under the large number of infected individuals.

Many articles, leaders and countries across the world are blaming China for the COVID-19 outbreak. Should they be blamed? Yes, but only to a certain extent. China has a history of mishandling outbreaks, including SARS in 2002 and 2003. Number of whistle-blowers and reporters were silenced. In one research article which was shared extensively in social media, Chinese experts had predicted an outbreak from bats in China. China should have prepared better for an outbreak learning from the mistakes of 2002. China shut down Hubei province 7 weeks after the first report [6]. However, as you will see Europe’s reaction to the outbreak was even worse.

While China, South Korea, Hong Kong, Taiwan were stabilizing the coronavirus spread by a combination of massive testing, contact tracing and strict lockdown measures, infections increased and spread in Italy, Germany, France, Spain etc. Like many Asian countries, Mongolia took sensible precautions. Mongolia stopped border transport with China and imposed travel bans on China, South Korea and Japan. Nonetheless virus found a way to Mongolia, where the first infected person (index case) was Frenchman who entered the country via Moscow. Similarly, travel from and within Europe preceded the first coronavirus cases in at least 93 countries. Italy alone preceded index cases in 46 countries compared to 27 countries associated with China. One of the most important reason for the spread from Europe is delayed closure of airports. On January 23, when China closed Hubei province there 500 reported cases world wide and 17 deaths in Hubei among a population of 58 million. Italy closed Milan’s main airport when Northern Lombardy had 3760 cases in a population of 10 million. Many airports in UK are still operating as of first week April with the country having more than 70,000 cases and 8,000 deaths. The lacklustre measures increased the rate of viral spread. In India, the index case was reported from China. However, many of the first hundred patients had a travel history from Europe. Four of the health ministers of European countries quit or were fired.

On March 22, 2020 USA overtook Italy in the number of daily confirmed cases. By April second week the number of new cases and deaths in Europe has decreased. USA has become the new epicentre for the COVID-19 outbreak. The increase is mainly blamed on the poor testing of COVID-19 and proper quarantine measures. 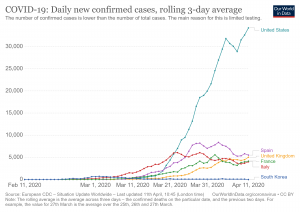 By April 11, 2020 there have been 17,12,674 cases out of which 3,88,910 have recovered and 1,03,796 people have died. Situations could have been worse if densely populated country like India would not have taken the draconian measures to shut down the country completely for non-essential jobs. Government of India also gave a much required economic package to help the poor handle the unprecedented crisis. While China has recovered from COVID-19 significantly, unfortunately, the end seems still far away for the COVID-19 pandemic the number of cases across the world is still increasing exponentially. Some countries like Brazil with huge populations still have not taken concrete steps and due to the same it is predicted to become the next epicentre after USA.

Nature Journal on 8th April, 2020 published a news update identifying 78 confirmed coronavirus vaccine candidates, 5 of which have entered the clinical trials. Hydroxychloroquine, which was termed a game changer by US president Donald Trump for fight against coronavirus, has not been scientifically validated. While few studies have shown its propensity as a vaccine, it is yet untested.

The eradication of the disease can take from two months to a year, may be even longer. The effect of the pandemic would be catastrophic on world economy. International monetary fund has already declared that the world economy is in recession. The impact would be different in different developing and developed countries.

The war is still not over. While China celebrated the opening of Wuhan after 76 days of lockdown, India, USA and many other countries are planning to increase the lockdown duration. Number of cases across the world is still exponentially increasing. We must take lessons from this outbreak. All countries should unite to improve testing and treatment of infected individuals. Stricter protocols should be established to prevent a similar pandemic to arise in future. COVID-19 proves that the all countries are equally vulnerable to epidemic and pandemics. Old Sanskrit phrase Vasudheiva Kutumbakam which means “world is a family” should become the motto of the world to fight COVID-19. Till that becomes a reality people will suffer.